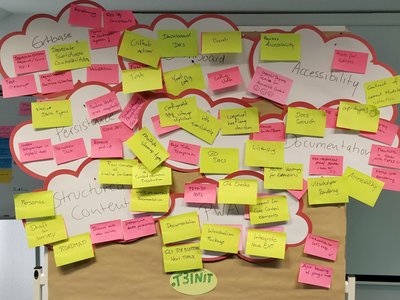 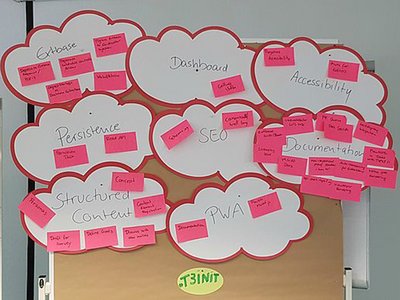 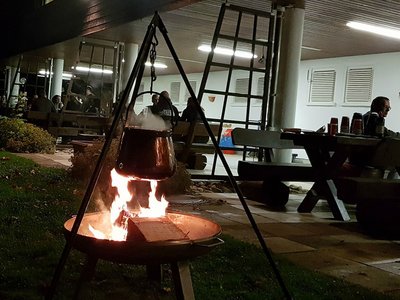 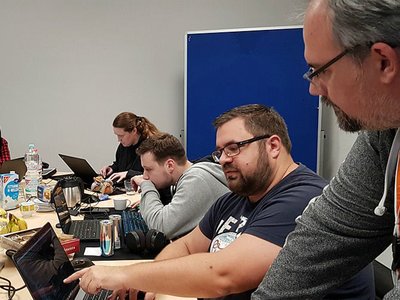 TYPO3 Initiative Week was introduced this year to bring together members of TYPO3 Initiatives to drive development forward. Core development is now organized into Strategic Initiatives where teams can focus on a targeted effort on one task. This week-long event provided a chance for everyone to connect across the initiatives.

24 participants from 8 initiatives met for 1 week in Festenburg, Oberharz, Germany to communicate, collaborate and connect with each other and bring TYPO3 initiatives to the next level.

From the first get together with a barbecue (main task: know everyones name) and a quick planning the next morning the participants were productive and working on their respective topics.

But then—the shock: The internet was down. For the whole hotel. A whole day. And night. What to do? Well, to be honest—maybe the internet being down should be a new team building strategy: it resulted in more communication and social interactions and very creative solutions, indeed.

Kay Strobach turned his phone into an internet hotspot for everyone (in the one corner where the phone actually had a connection). Petra Hasenau quickly organized alternative working rooms at the TU Clausthal (Shout-out to the TU for the quick help!) and the participants gathered in the hotel bar for extended socializing.

The next morning, the technician was welcomed by an eagerly waiting group—there is only so much socializing we could afford with our task list—but he exceeded expectations: he found and fixed the problem quickly and the hard work continued. (See photos for a detail view of the problem and the solution.)

Now that everything was working as planned, the initiatives started to churn out results, see the following sections for results per team:

The TYPO3 Accessibility Initiative just recently restarted their work on improving accessibility awareness into the TYPO3 universe. They already started regular calls for coordination and questions and answers everyone can join (see Slack channel #cig-accessibility).

During the Initiative Week the team worked on making the TYPO3 page tree accessible, reimplemented the highlighting for the active module menu and made the alternative text field in the backend more prominent, so editors will have more incentive to use it. In addition to the concrete tasks that were done, a lot of communication with the other initiatives happened as accessibility is something every other initiative needs to incorporate.

The first release of the dashboard extension happened at #t3con. Since then, the initiative collected feedback and wishes which were built during the Initiative Week. For example, we now have the possibility to define presets (predefined dashboards), add new dashboards, groups and widgets.

Additionally, a lot of work has been done on the architectural base: Configuration and code was reworked, functional tests covering 100% of the code have been added. A documentation was also written and published.

Stay tuned for the next level dashboard release coming soon.

The Documentation Team had a very successful week, without any prompting a lot of people took the week as a chance to work and collaborate on documentation resulting in lots of changes all around. For example, participants write new documentation for TYPO3s new dependency injection, SEO and the dashboard extension.

The documentation theme was updated, documentation was restructured to be easily accessible and the next steps for documentation search were mapped out. Old services like api.typo3.org were updated and launched. Enjoy our new and improved documentation and check back on docs.typo3.org regularly for the latest news.

Alexander Schnitzler—the component merger for extbase—was also part of the T3INIT. He worked on various bug fixes and reviews in the extbase area, as well as talking about future changes and where we want to go with extbase. In addition to the reviews done, a rework of extbase documentation has been started.

The persistence initiative took care of two long standing issues: unified return types for PDO drivers and index comparison in the install tool. Additionally, SQL Server for tests got an update and PDO MySQL was added to the test suite.

To make further progress on the initiative topics, the team worked hard on removing pid -1 records from the system, to simplify overlaying records in the future, therefor removing complexity and making new APIs smoother to use.

Coordination and communication happened with other initiatives as persistence provides the base for many of them.

The PWA and headless initiative worked on many different parts of their project.

They created a PWA Demo project based on DDEV to get people started quickly. If you want to add basic PWA support to your existing Fluid based website have a look at the new extension pwa_manifest.

The team is also providing nuxt-typo3 and create-nuxt-typo3, frontend JS application and its kickstarter. Take a look at https://typo3-initiatives.github.io/nuxt-typo3/ to get an impression.

As one of the bigger features the team started with a Schema.org integration for TYPO3.

The Structured Content Initiative set up a roadmap for their work based on the current pain points. They created 16 personas for editors, integrators, and developers as a base for future concepts and created a survey to collect data from integrators and developers as a first step. The team looked at other CMS solutions for their challenges and took note of good and bad practices.

The first scribbles for a new editing interface were created and the draft for the abstract minimal requirements for a content block adjusted. One of the more code-related outputs of the team is work done on the current data processors—mainly streamlining—and adding new ones according to community requirements.

In addition, they spent a lot of time talking to the other participants to gather opinions and pain points and make sure that the future work can continue smoothly.

Other Topics We Tackled

Various other topics were tackled during the week: a few issues for the linkvalidator were fixed, the page tree performance was improved by implementing ajax loading, a password reset possibility for the backend was implemented and a lot of pending patches were reviewed.

To get a visual impression of what was done, see the following two pictures. The first one is day one—the topics we brought to be started, the second is the result—all green-yellowish post-its are done.

All in all it was a successful event with lots of new goodies for TYPO3 as well as improved communication between the initiatives, strengthening the connections of our community.

Thank You to the Sponsors and Participants!

This event—as most of them—would not have been possible without the sponsors, so a special thanks to:

… and of course thank you to all the participants themselves and in many cases the companies sending them:

A very special thanks from my side to everyone for making that week incredible.

Stay tuned for the next report.